According to experts, today, grain loss due to fragmentation as grains pass through grain elevator pipe is 6–7%. Conventional metal pipes serve an average of one to two seasons and require additional repair right at the time of harvesting.

Up till now, the solution has been lining the pipes with polyethylene attached to the metal with rivets. However, this significantly increases not only the cost of the pipe, but also its weight, which complicates installation and necessitates the use of specialized equipment and personnel. In addition, at the time of transportation, accumulation of static electricity occurs, which regularly causes blockages and can lead to ignition of grain dust.

Recent developments in the application of nanotechnology have opened the door for a new solution – an antistatic polyurethane lining enhanced with graphene nanotubes for grain pipes and other system elements for the cleaning, drying, storage and processing of grain. Polyurethane is an abrasion-resistant material that can significantly extend the life of pipes. The nanotube-enhanced lining is applied as a layer 3–10 mm thick onto the inner surface of the pipe by hot casting, which provides strong adhesion and a stable level of resistivity of 10^5 Ω∙cm. 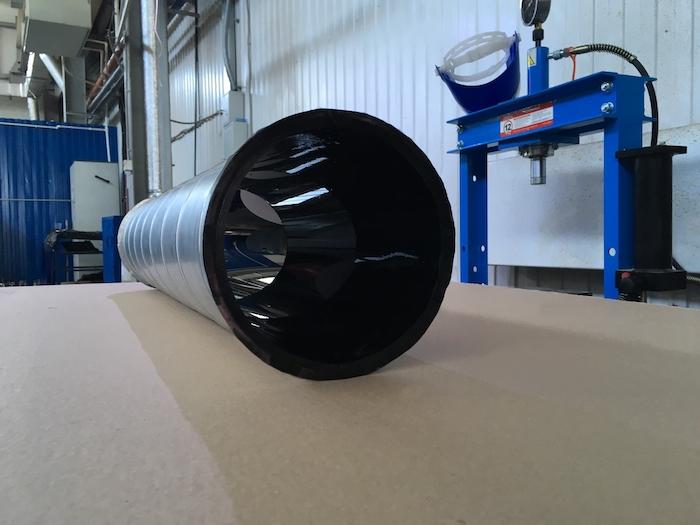 It is important to note that due to the electrical conductivity of the material, there is no static electricity accumulation during grain transportation over the entire length of pipe, which prevents the grains from adhering to the pipe and reduces dust formation, eliminating the risk of spark generation and fire. Such lining protects grain from damage and as a result improves its quality.

The lining of pipes with wear-resistant polyurethane enhanced with TUBALL graphene nanotubes, produced by OCSiAl, significantly increases the service life of the grain pipeline: the coating loss by weight is 0.05% after 100,000 tonnes of grain passing, which allows these pipes to be used effectively for several seasons without replacement. Moreover, their cost is 20–30% lower than similar pipes with polyethylene lining.

This innovative solution was developed and implemented by Unikom Service, a manufacturer of polyurethane products. In June 2019, prototypes of lined pipe were installed at one of the elevators in grain transportation areas. During the season, 180,000 tonnes of grain passed through the pipes, including rapeseed, wheat, barley, and soy. Inspection of the prototype after six months showed good results: no tearing or abrasive damage were found.

The economic benefits of using graphene nanotubes to protect against the accumulation of static electricity is achieved due to the extremely low concentration in the final material – 0.04% of nanotubes in total weight of polyurethane compound. Thus, according to experts, graphene nanotube-enhanced polyurethane pipe lining has good prospects for application in any climatic conditions in different regions of the world.