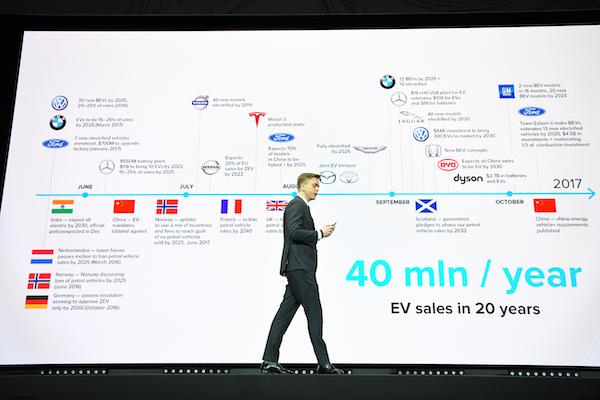 How can lithium-ion battery energy density be increased up to 400 Wh/kg? What is the key to adopting silicon anodes in the industry, enabling commercial mass-produced electric vehicle (EV) batteries? The 2019 Nanoaugmented Materials Industry Summit (NAUM’19) focused on answers to these questions, with 450 key industry players and scientists from 31 countries discussing 50 diverse applications of graphene nanotubes, including the impressive results that these tiny tubes are achieving in batteries.

Maximizing lithium-ion battery energy density is the number one target in the energy field. Current batteries’ energy level limits the scaling up of advanced technologies such as EVs, autonomous cars, passenger drones and space tourism. Even EVs are not yet mass-market products. The NAUM’19 industry summit, which took place in Kyoto, Japan, this November, unveiled the ways in which nanotechnology is addressing these challenges.

The battery industry is currently aiming to reach an energy density of 300 Wh/kg. Professor Jonathan Coleman from AMBER Centre at Trinity College Dublin , in his project collaborating with Nokia, has already gone well beyond this target. By replacing both the binder and the conductive additive (typically carbon black) with TUBALL graphene nanotubes, his research group has made highly conductive electrodes with record thickness, resulting in maximized energy density. “Carbon nanotubes give you a very unusual composite structure – it’s called a segregated network, where nanotubes form webs that wrap around particles. This means that you have both very good electrical connection to the particles and also fantastic mechanical properties.” Coleman’s group uses these single wall carbon nanotubes in both the cathode and the anode. “You can see that we are matching the theoretical expectations and we are getting energy density of 400 Wh/kg,” Prof. Coleman added. 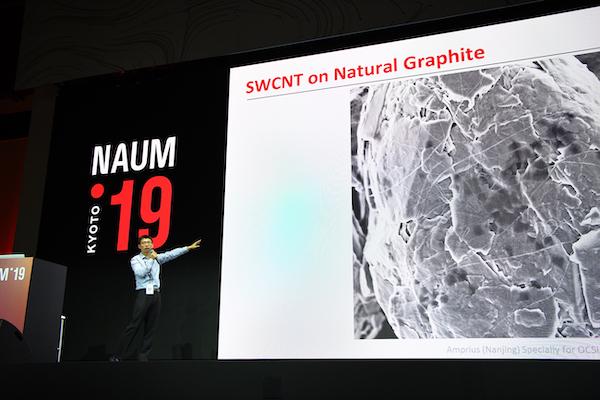 Moving from laboratory results to mass industrial production, another NAUM’19 speaker shared his data on how graphene nanotubes work in silicon anodes. “Nanotubes create a cocoon around the electrode particles, making a uniform network that strengthens the electrode,” said Cen Wang , Amprius (Nanjing) Vice President and Director of R&D Center. “That leads to a silicon anode with excellent cycle stability and with energy density of more than 300 Wh/kg in EV battery application,” Mr Wang added. Amprius is known as the pioneer of the highest energy density lithium-ion batteries in the world.

The battery industry is currently aiming to reach an energy density of 300 Wh/kg. Andrey Senyut , OCSiAl Energy CEO , reported on the rapidly increasing demand for graphene nanotubes from battery manufacturers, who value the way that these nanotubes allow the use of significantly more silicon in the anode compared with other additives but without affecting the excellent cycle life of the designed batteries. “Seven of the ten largest lithium-ion battery makers are now either already manufacturing or at the pilot stage of manufacturing batteries with TUBALL inside. You can actually now buy such batteries on the market with a capacity similar to that of the batteries being used in the Tesla Model 3, but at a lower price,” Mr Senyut said.

"You can actually now buy such batteries on the market with a capacity similar to that of the batteries being used in the Tesla Model 3, but at a lower price"

In its turn, the cathode has already adopted graphene nanotubes being the best conductive additive on the market. At NAUM’19 in Kyoto, Chihiro Shinoda of the Battery Materials Team in the Product Development Department at Daikin Industries shared data on the company’s new binder with TUBALL nanotubes that is being used in cathodes for increasing the conductivity, slurry stability, flexibility, capacity and adhesion.

The world lithium-ion battery market is about to change. Tanaka Yoshiaki , Senior Researcher at the leading Japanese market research organization Yano Research Institute , said at NAUM’19 that the main current application of lithium-ion batteries is still smartphones, but the EV share is growing fast along with an increase in the production of EVs and the creation of related urban infrastructure. This trend is accelerating the increase in demand for graphene nanotubes, due to their big potential for high energy density batteries. The first mass-produced EVs with lithium-ion batteries enhanced with TUBALL graphene nanotubes have already been launched on the Chinese market.